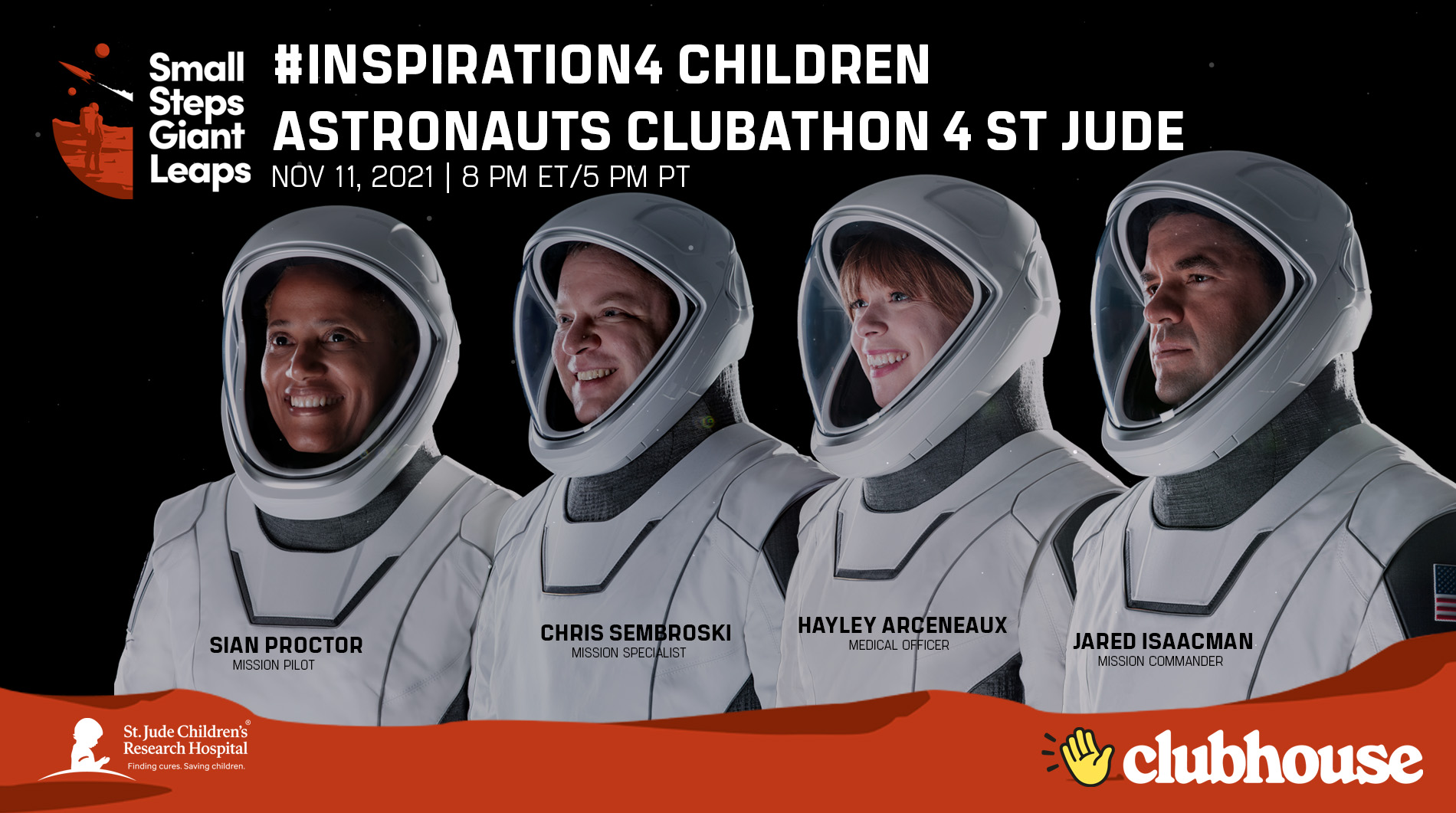 Inspiration4 Crew to Appear on Clubhouse in St. Jude Fundraiser

“This will be the first time all four astronauts of the historic Inspiration4 mission will appear together on Clubhouse—and for a noble cause,” said Alder Riley, the Founder of the Small Steps & Giant Leaps club. “Elon Musk, ESA scientists, NASA officials, and countless professionals in the space industry have come to Clubhouse this past year and have found a welcoming, like-minded community. We are beyond thrilled to host this pioneering all civilian crew for their first appearance together on a social audio platform. These are modern-day heroes of humanity pushing forward the idea that space exploration is for everyone.”

The Small Steps & Giant Leaps club is a community of space enthusiasts on Clubhouse with over 77,000 members. Clubhouse is a privately held audio-based social media app startup that was launched in March 2020 by co-founders Paul Davison, CEO, and Rohan Seth with investment from Andreessen Horowitz, 10X Capital, Offline Ventures, Tiger Global Management, and others according to Crunchbase.

Inspiration4 was the world’s first all-civilian mission to space, and all four crew members will make special appearances during the event including mission commander and benefactor Jared Isaacman; Inspiration4 Medical Officer Hayley Arceneaux, the youngest American to fly to space, the first person with a prosthesis to go to space, and the first pediatric cancer survivor to go to space; Dr. Sian Proctor, the first Black woman to pilot a spacecraft; and mission specialist Chris Sembroski.

“I am excited to share stories from our journey as we continue raise funds and awareness for St. Jude’s mission of curing pediatric cancer and disease,” said Sembroski. “Come join me and the Inspiration4 crew as we meet on Clubhouse in the Small Steps and Giant Leaps club on November 11, 2021.”

The Inspiration4 mission, commanded by Jared Isaacman, the 38-year-old founder and chief executive officer of Shift4 Payments [NYSE:FOUR] and accomplished pilot, was ideated by Isaacman to send a humanitarian message of possibility, represent a new era for human space exploration, and inspire support for St. Jude Children’s Research Hospital. For background on the Inspiration4 crew, see the original crew announcement from March 2021 as well as crew bios at Inspiration4.com. Inspiration4 launched from historic Launch Complex 39A at NASA’s Kennedy Space Center in Florida on September 15, 2021 onboard a SpaceX Crew Dragon capsule and Falcon9 rocket . Upon conclusion of the multi-day journey, the Dragon capsule re-entered Earth’s atmosphere for a soft water landing off the coast of Florida. To learn more about Inspiration4, visit www.Inspiration4.com and follow the mission on social media on Twitter (@inspiration4x), Facebook (@inspiration4mission), Instagram (@inspiration4) and YouTube (@Inspiration4).

St. Jude Children’s Research Hospital is leading the way the world understands, treats and defeats childhood cancer and other life-threatening diseases. Its purpose is clear: Finding cures. Saving children.® It is the only National Cancer Institute-designated Comprehensive Cancer Center devoted solely to children. Treatments invented at St. Jude have helped push the overall childhood cancer survival rate from 20% to more than 80% since the hospital opened more than 50 years ago. St. Jude won’t stop until no child dies from cancer. St. Jude freely shares the discoveries it makes, and every child saved at St. Jude means doctors and scientists worldwide can use that knowledge to save thousands more children. Families never receive a bill from St. Jude for treatment, travel, housing or food – because all a family should worry about is helping their child live. Visit St. Jude Inspire to discover powerful St. Jude stories of hope, strength, love and kindness. Join the St. Jude mission by visiting stjude.org, liking St. Jude on Facebook, following St. Jude on Twitter, Instagram and TikTok, and subscribing to its YouTube channel.

Tell us about your thoughtsWrite message Cancel reply

My Tweets
Back to Top
Close Sidebar